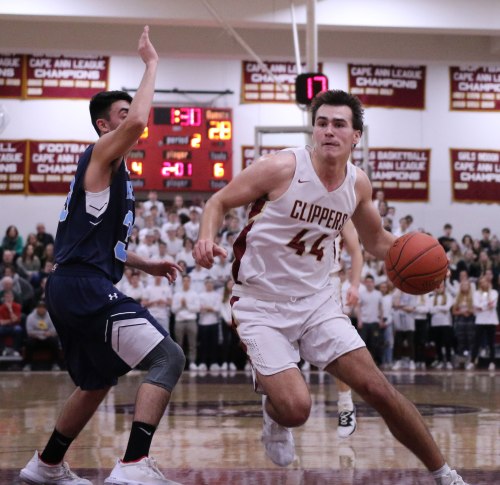 (Newburyport MA) “I was getting flashbacks from last year in the first half,” said Newburyport coach Dave Clay afterwards.

And he probably wasn’t the only one.

Dracut, last year, came to Newburyport and stunned the higher seeded Clippers. The Middies would go on to stun a few other teams and win the Division 3 North title.

But that was last year. This time around, the Clippers turned things around offensively and defensively in the second half and defeated Dracut, 67-57, on Monday night in a D3 North First Round game.

The Clippers (16-5) were in front early, 12-6, and then fell apart defensively. The Middies whacked Newburyport with a 25-point second quarter and were in front, 35-29, at halftime.

“The tone at halftime was that we had to be the tougher team in the second half,” said Jake Robertson.

“We needed more effort defensively,” said Coach Clay. “We needed to help earlier and be tougher with our on-ball defense.”

The Clippers may have been doing those things to start the second half but for four minutes the scoreboard told a different story.

Dracut was up, 45-38, with four minutes to play in the third quarter. The Middies were making tough shots against the taller Clippers.

Was Newburyport on its way to another shocking loss to Dracut?